In this lesson we look at all types of class declaration and extension and how to use interfaces and the package and import statements. We examine the declaration, initialization and usage of primitives, arrays, enums, and objects as static, instance, local variables and their respective scopes. After this we cover correct use of overriding and overloading of methods as well as identifying legal return values for methods. we investigate constructors to determine if a default constructor will be created, and if so, determine the behaviour of that constructor. We finish of this lesson by studying class instantiation and how to instantiate nested and non-nested classes.

Java comes with two types of variables to choose from, primitives and reference, both of which can be declared as static variables, instance variables, method parameters and local variables. Java is a strongly typed language and as such cares about the type of the variables we declare. So what does this statement actually mean? Well whenever you declare a variable in Java, you have to give it a type, or the compiler complains when you come to compile your code. You also have to name the variable and there are rules on naming.

These rules apply to all variables, as well as classes and methods (collectively known as identifiers)


Click a link in the table below to show lesson usage for any keyword you're interested in:

Keywords marked with an asterisk (*) are not used.

Although not a rule as such it's also important to know that identifiers are case-sensitive.

The table below lists the eight primitive types available in java:

Reference variables are concerned with objects and how we access them. The reference variable doesn't hold the object itself but some bits that act as a pointer to an address in memory where the object exists. How the JVM holds this bits isn't important for us as programmers, just the fact that this memory address pointer is used by the JVM to access a unique object. There are three steps involved in object creation: 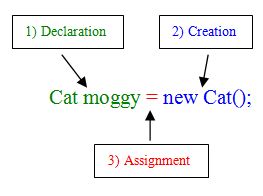 The table below shows the types of access available in Java for our top-level classes.

We create an enumeration using the enum keyword. The identifers TOMATO, CHICKEN and PRAWN are known as enumeration constants and are implicitly declared as public, static members of Soup. When we declare enumeration constants it's not obligatory to use all uppercase letters, but it lets others see this is a constant and so we use this convention here.

A method override must adhere to the contract it has with the superclass method. This contract being, a method override must have exacly the same arguments and return type (or co-variant thereof) as the superclass method with the same method name. This is different to an overloaded method as discussed below and in the Objects & Classes section, in the Methods lesson, in which the argument lists has to be different. In fact if you change the argument lists, that's what you end up with an overloaded method. So to make sure we are doing a method override we need to keep the contract.

When we override a superclass method there are rules to adhere to:

You can use the same method name more than once in a class or subclass and this is known as overloading. When using overloading each method must have different parameter lists so the compiler knows which method to call. Having the same parameter types is fine as long as the order differs.

When we overload a superclass method or a method in the same class there are rules to adhere to:

Constructors allow us to instantiate our objects via declaration, assignment and creation.

The table below shows the types of access available in Java for constructors.

This type of inner class is a member of the outer class just like instance variables and methods are and as such the same modifiers and rules apply as to amy member. We can instantiate a non-static member class as part of the outer class state or seperately when you don't want all outer instances to have an inner instance.

The final type of inner classes we can use are anonymous inner classes which are different syntactically from anything else in Java and come with a lot of constraints: