In Java we can declare variables anywhere within a block of code. A block starts with its opening curly brace and ends with its closing curly brace. A block and where it resides defines the type of the variable and the scope of the enclosed data. Therefore each time you start a new block of code you start a new scope. Scope determines the visibility and lifetime of the variables within it. Java comes with three kinds of scope and we name variables according to the scope they reside in as detailed in the table below.

A Java source file is made up of a class with the code for the class going inside the class definition. The name of the file that we store the source in, which is also known as a compilation unit, should be the same as the class it contains including any capitalisation when the class is public. The reason for this is the Java compiler will use the name of the public class within our program to create the bytecode version of our source file. Before we go into more details of this lets take a look at the structure of a Java source file using a diagram. 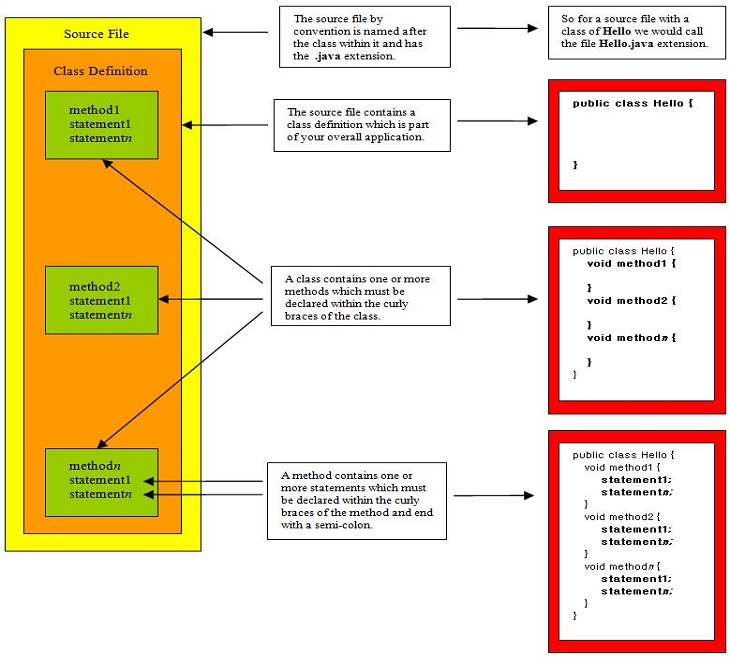 So using the diagram above we can note down a few points about a Java source file:

There is more to source files than the points raised above but for now this is more than enough to think about.

As a side note Java has a set of coding standards for how to set out your code. Of course with the restrictions of screen sizes the site can't always adhere to these standards. Also in some tests we put more than one statement on a line which is what you will get if you sit the certification. Use the following link Code Conventions for the Java Programming Language to get a copy of coding standards to get into the habit of using them.

A Java application is a class or collection of classes that interact with each other to produce the desired results. So how does the application know which class to start off with? Well within our suite of classes one of the classes needs to have a special method called main() which is used to run the application from the command line. This is achieved by typing the java command on the command line followed by the name of the class containing the main() method. Lets take a look at the syntax of the main() method and see how it fits into a class.

There's a lot of information contained within the diagram above so take your time looking at it and getting a feel for the syntax and how it all hangs together. We will cover things like access modifier, objects and such in later lessons so we don't overload too much at the moment.

In Java we can keep libraries of related classes together using a package and this is in essence what the Java language is, a collection of packaged libraries.

There are two major benefits to the package approach adopted by Java.

Java allows us to import parts of a package, or even the whole package if required for use in our code and we do this using the import keyword.

Define the scope of variables

A Look At Java Code Structure