In this lesson we begin our studies of Java exceptions by looking at the Java exception hierarchy and the various classes within it. We then list the methods from the Throwable class along with the checked and runtime exceptions available within the java.lang package, which is implicitly imported into all our programs.

Before we look at the hierarchy lets define the terminology used in the exceptions part of the Flow Control section. An exception refers to an exceptional condition that has occurred to alter the normal flow of our programs. When an exception occurs it will get thrown by the JVM or we can determine conditions to throw an exception ourselves when required. We can catch thrown exceptions and the code we write for this purpose is known as an exception handler. We can also declare exceptions in our method definitions, when we know for instance that the method will try to read a file that may or may not be present.

Two subclasses inherit from the Throwable class and these are the Error and Exception classes. These classes, and subclasses thereof, are used to create an instance of the appropriate error or exception along with information about the exception:

The diagram below is a representation of the exception hierarchy and by no means a complete list, but should help in visualisation: 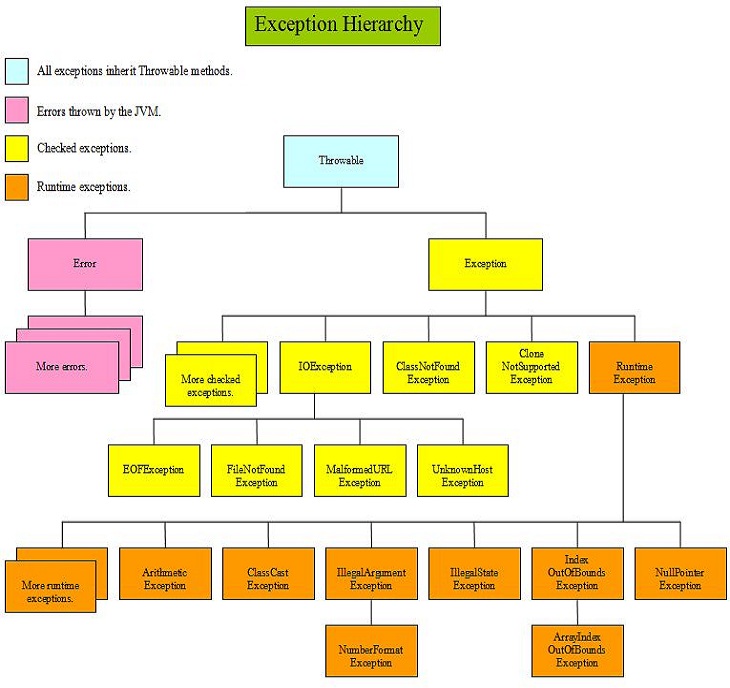 In the diagram above each box represents a class and as you can see the Exception class, which interests us as programmers, has lots of subclasses attached to it. We are just showing some of them in the above diagram as space permits, but I am sure you get the idea. When an exception happens an exception object of the appropriate class is created and we can use code to handle the exception. We will go into the mechanics of how we achieve this in much greater detail over the next few lessons. For the rest of this lesson we are just going to show the methods of the Throwable class and the exceptions that exist in the java.lang package. Hopefully this will give a feel for the overall architecture before we start handling exceptions ourselves.

We will use the above methods as we work through this section..

The table below lists all the checked exceptions that are defined in the java.lang package.

The table below lists all the runtime exceptions that are defined in the java.lang package.

In this lesson we began our studies of Java exceptions by looking at the Java exception hierarchy and the various classes within it.

Now we know what the Java exception hierarchy looks like and the classes involved its time to start handling exceptions which may occur within our code.

Creating Our Own Exceptions