We start this lesson by looking at code that uses the primitive wrapper classes and/or autoboxing and unboxing. We then look at the differences between the String, StringBuilder, and StringBuffer classes. After this we investigate how we can use classes within the java.io package to read from files, write to files and use the BufferedReader, BufferedWriter, File, FileReader, FileWriter and PrintWriter sometimes in unison to create a software solution. We then use classes from the java.text package to correctly format or parse dates, numbers, and currency values for a specific locale including usage of the appropriate methods to use the default locale or a specific locale. We finish the lesson by looking at regular expressions and examine how to format and tokenize our data using java.

Lets take a look at the points outlined at Oracle Java SE 8 Programmer II for this part of the certification.

The wrapper classes provided in Java allow us to wrap any of the primitive types in an object. The benefits of this are two-fold:


The following table lists the primitive types, their wrapper classes and the constructors available:

See String Immutability for more on this.

String immutability can improve efficiency, the downside is we can also have a lot of strings that get lost in the string constant pool, when we reassign or discard our reference variables.

Character streams are defined within two class hierarchies, one for input and one for output:

These classes define the characteristics that are common to character input and character output streams, which are implemented in the concrete subclasses of each hierarchy.

The diagram below shows the classes in the character output stream hierarchy of which the Writer class is the abstract superclass.: 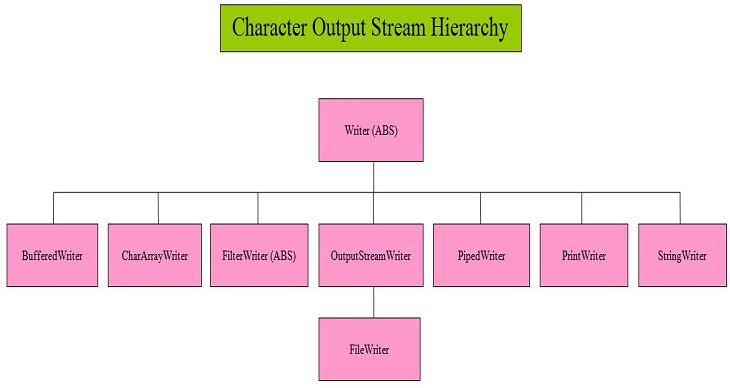 Click on one of the class links in the table above to see usage for the character output streams required for certification.

The diagram below shows the classes in the character input stream hierarchy of which the Reader class is the abstract superclass.: 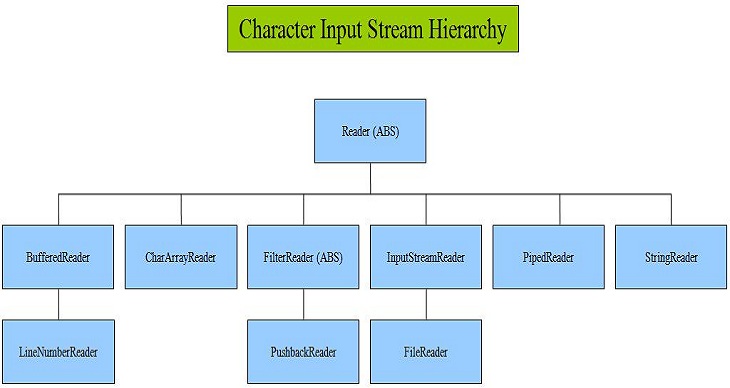 Click on one of the class links in the table above to see usage for the character input streams required for certification.

The diagram below shows some other pertinent classes in the java.io package not covered in the byte and character streams above:

Click on the class link in the table above to see usage for the File class required for certification.

We will finish this lesson with a talk about the File class that exists within the Java.io package and how we use objects of this class to represent an actual file and directory pathname that may or may not exist already on a hard drive. A File object doesn't contain the file in question or any data associated with the file, it just acts like a pointer to said file and can be a relative or absolute pathname:

The table below gives a brief description of the date, number and currency classes that we will be using in this lesson:

The java.util.Date Class represents a specific instant in time that gives us millisecond precision. The Date class is intended to reflect an internationally standardized Computer Date and Time which starts from 1 January 1970 00:00:00 UTC (Universal Time Coordinated). Date object creation using the long argument is meant to reflect dates in milliseconds strarting from this date. Looking at the official documentation for the java.util.Date Class we can see there is one other non-deprecated Date constructor that creates a Date object that represents a date and time when the the object was allocated to the nearest millisecond.

The Date object still serves some purpose though:

The java.util.Locale class allows us to create an object that represents a specific geographical, political, or cultural region of the world. We can then use the Locale object in conjunction with the java.util.DateFormat or java.util.NumberFormat classes to get locale specific dates, times, numbers and currencies for that locale.

Operations that require specific locale information to perform tasks are known as locale-sensitive and as such use a Locale object to tailor user information accordingly. As examples, this could include the way dates are displayed, the way numbers are formatted or the way currencies are viewed.

So once we set a specific locale we can use this object in conjunction with the java.util.DateFormat or java.util.NumberFormat classes to format locale-sensitive data for our users. In this way we can handle internationalisation and localisation when we want it, or do nothing and automatically use a default locale otherwise.

The table below just shows the formats we can pass to the static factory methods of the DateFormat class:

See Locale-sensitive Dates & Numbers for code examples of locale sensive data using a combination of the classes discussed in this lesson.

A regular expressions is a string containing normal characters as well as metacharacters which make a pattern we can use to match data. The metacharacters are used to represent concepts such as positioning, quantity and character types. The terminology used when searching through data for specific characters or groups of characters is known as pattern matching and is generally done from the left to the right of the input character sequence.

Regular expressions are a large topic, but here we will just cover the parts you need to know for certification. For a full list of regex constructs visit the Oracle online version of documentation for the JavaTM 2 Platform Standard Edition 5.0 API Specification and scroll down the top left pane and click on java.util.regex.

Format specifiers which have the argument list set to null have the following syntax:


Format specifiers used to represent date and time types have the following syntax:


Format specifiers for general, character, and numeric types have the following syntax:


The table below lists some conversions with their descriptions. You can find the complete list of flags and conversions in the API documentation for the java.util.Formatter class.

The java.util.Formatter class allows us to format output through a wide variety of constructors. The API documentation is extremely detailed and we are just showing an example so you get the idea:

We finish off our tour of the Java API by looking at tokenizing our data. For this we will first look at the split() method of the String class which uses a regular expression delimiter to tokenize our data. After this we look at the java.io.Scanner class; objects of this class allow us to break input into tokens using a delimiter pattern which defaults to whitespace or can be set using a regular expression.

The java.util.Scanner class is a simple text scanner which allows us to parse primitive data types and strings using regular expressions. Objects of this class allow us to break input into tokens using a delimiter pattern. The resulting tokens can then be converted into values of different types using one of the nexttype methods available in the java.util.Scanner class. In our example we show how to use the Scanner class with the default delimiter of whitespace and also with a delimiter created using a regular expression.