We start this lesson by looking at encapsulation, its advantages and how to achieve it within our code. We then look at the design principles of coupling and cohesion and describe the benefits of loose coupling and high cohesion. We then explain polymorphism and how we use it in the Java language before looking at object reference casting and determine when casting will be necessary whilst recognizing compiler vs. runtime errors, related to it. After this we examine the effect of modifiers on inheritance with respect to constructors, instance or static variables, and instance or static methods. We then look at code that declares and/or invokes overridden or overloaded methods and code that declares and/or invokes superclass or overloaded constructors. We finish the lesson by investigating code that implements "is-a" and/or "has-a" relationships.

Lets take a look at the points outlined at Oracle Java SE 8 Programmer II for this part of the certification.

Encapsulation is a language mechanism used to restrict access to an object's components. In Java parlance this is a mechanism to restrict access to the members (instance variables and methods) of a class, constructors and even to the class itself. So how do we achieve this in Java?. Well Java provides us with the access modifier mechanism for restricting access to our classes, which are the basic unit of encapsulation in Java. We can also restrict access to our instance variables whilst providing access to them via public methods. We can limit construction to the class itself using the private keyword, or to the package the implementation is in using the protected keyword or with no modifier package-private / (the default). The table below lists access modifiers in more detail.

When we override the instance method members of the superclass in a subclass, we are writing a more specific method for use by the subclass that overrides the inherited method. We will go into overriding in much more detail in Overriding Methods later in the lesson.

We do not override instance variables in a subclass with the same identifier in the superclass. This is known as hiding and is discussed in the Inheritance Concepts - Superclass Members section.

We do not override static methods in a subclass with the same identifier in the superclass as these are class methods and not related to any instance. This is also known as hiding and is discussed, paradoxically in the lesson on Polymorphism. Following is a slideshow to digest the information we have written so far about inheritance: 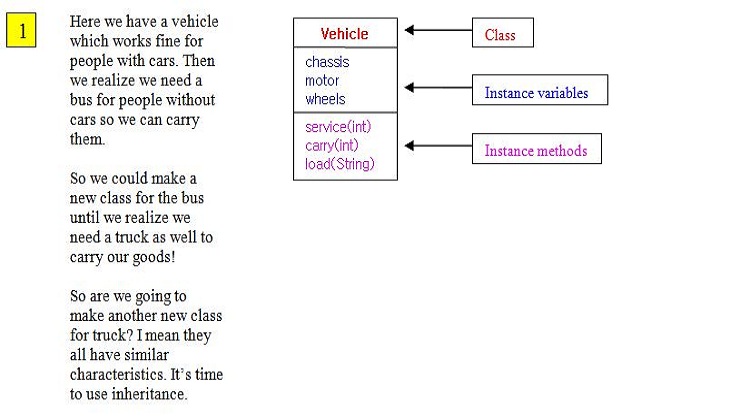 All is good in Vehicle Town, we have our vehicle class and everyone is happy. But then, people without cars want to get on a bus and people want trucks to transport goods. Let's use inheritance, rather than write new classes and replicate a lot of things that all vehicles can do. 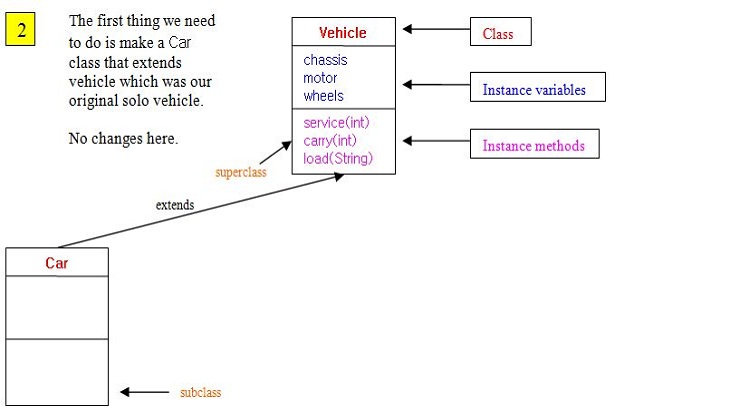 The first thing we do is make a Car class, which is all our original Vehicle class held; so we don't need to change anything here. 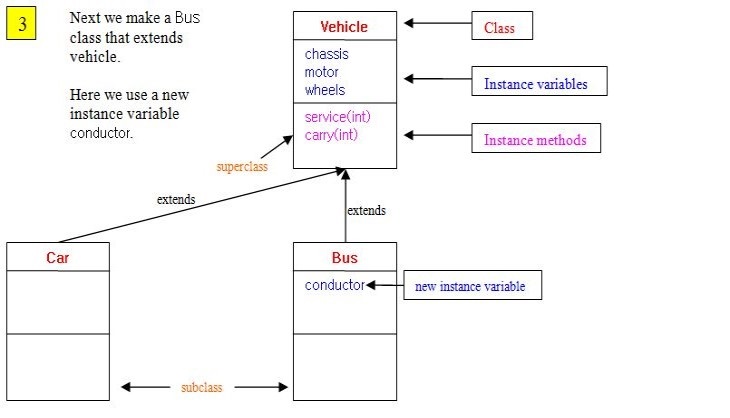 Our new Bus class comes next and we need a new instance variable conductor. 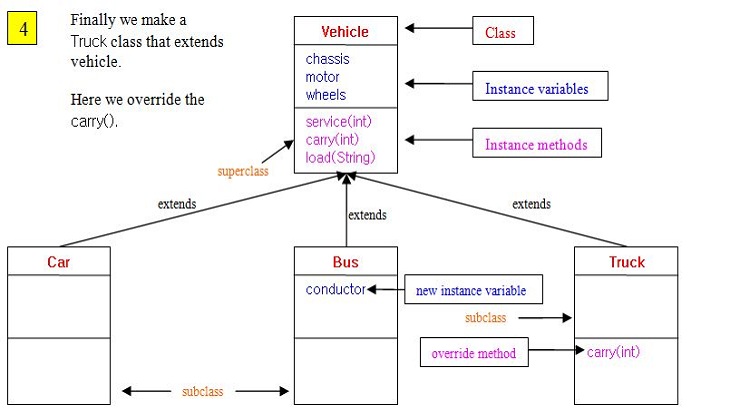 Last is our Truck class, in which we are going to override the carry() method from the Vehicle class.

The code for these classes is available in the OO Concepts - Inheritance Basics lesson.

Before we code up our new Truck subclasses we need to talk about the relationships in our inheritance trees. How do we know what to make a superclass or subclass and what goes into our instance variables for these classes. There is a very simple way to check, by using the IS-A and HAS-A test, to see what sort of relationships our classes and data members have. So how do we do this?

For the IS-A, anywhere where you would use the extends keyword just replace it with IS-A and see how the relationship looks.

For the HAS-A test, use the class followed by HAS-A and then the name of the possible instance variable and see how the relationship looks.

Try the following test to get to grips with IS-A and HAS-A relationships:

Using IS-A and HAS-A are quite a simple way for checking inheritance relationships and the good thing is we can test for subclass suitability all the way down the inheritance tree. Lets take part of the inheritance tree from the slideshow above and check our new level of subclasses to make sure they pass the IS-A tests for all their superclasses before we code them up. 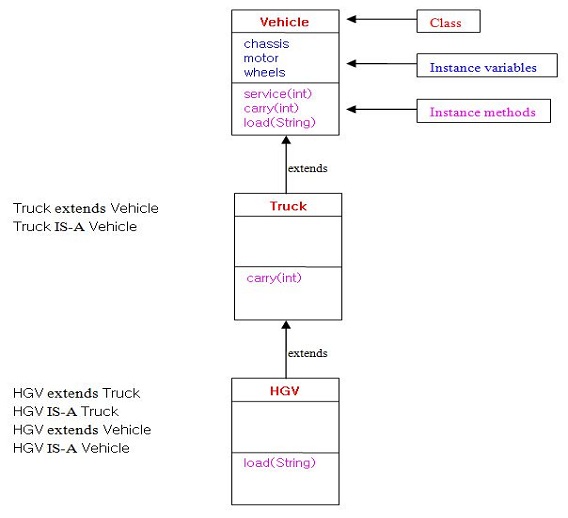 Well our new HGV class passes the IS-A tests for being a Truck and Vehicle so our inheritance tree looks good. We can also do the same for the Garbage class and it passes as well. We can now code up our new Truck subclasses:

The table below shows the four types of access available in Java from the most open (public) to the most restrictive (private). We can only explicitly apply the public access modifier to our top-level classes (the classes we compile) but for members and constructors we can explicitly apply the protected and private access modifiers as well. We will talk about packaging in the Packages lesson, but for now we are going to examine how to protect our class members from unwanted access and modification.

See the OO Concepts - Encapsulation lesson for example usage and information on how we use getters and setters to enforce tight encapsulation.

The table below shows the types of access available in Java for our top-level classes.

The table below shows the four types of access available in Java for members (variables, inner classes and methods).

The table below shows the types of non-access modifiers available for use with variables.

There might be a scenario whereby, you need to stop a class from being inherited. We can stop inheritance occurring by using the final keyword in the class definition:

On a similar note there might be a situation whereby, you need to stop a method from being overridden. We can stop this happening by using the final keyword in the method definition:

If you mark a superclass instance variable with the private access modifier it is not inherited by subclasses but can be accessed using public setters and getters of the superclass, which is the essence of encapsulation and of course is available for instantiation purposes through implicit or explicit calls to super(). Other accessibility to a superclass instance variable is dependant upon the access modifier used and packaging as described in the Access Modifiers table above.

If you mark a superclass static variable with the private access modifier it is not inherited by subclasses. Other accessibility to a superclass static variable is dependant upon the access modifier used and packaging as described in the Access Modifiers table above. Static methods that are accessible are also inherited by subclasses unless the subclass has a method with the same name and parameters which is known as method hiding and is discussed in OO Concepts - Static Overrides?


There are other rules regarding exceptions declarations when using overrides and these are discussed in the Exceptions section when we look at Overridden Methods & Exceptions.

Polymorphism, which roughly translated from the Greek means 'the ability to assume different forms'. So what does this mean for us Java programmers? To explain this we will refresh our memory about how we create an object: 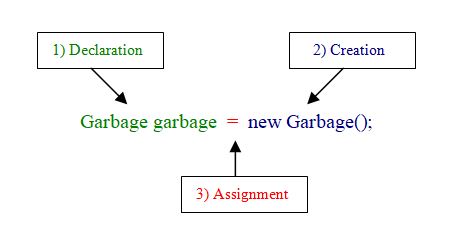 
The reference type and the object type are the same.

With polymorphism when you declare the reference type in the declaration, it can be from a superclass of the object we are creating. Or looking from a different perspective, when creating an object, we can use any supertype from a class that we have extended. The compiler has no problem with this but the power of polymorphism happens at runtime through the concept of virtual method invocation. This concept is the dynamic selection of overridden methods at runtime based on the actual object type, rather than the reference type. This only applies to instance methods, everything else uses the reference type at runtime.

So what does this give us I hear you ask? Well we can use the supertype for reference type declaration when instantiating our objects, safe in the knowledge that the JVM will use the actual object created to invoke the correct overridden methods of the subtypes at runtime.

There are some things to remember with regards to reference variables when using polymorphism: